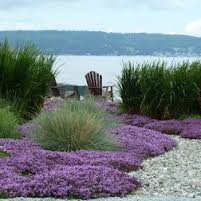 Gravitas: One of the Roman virtues, along with pietas, dignitas and virtus. It may be translated variously as weight, seriousness and dignity, also importance, and connotes a certain substance or depth of personality (Wikipedia).

Spring is just down the street, bringing promises of new growth, rebirth, and fresh beginnings. I gaze out my window at the sodden lawn, looking at the jumble of weeds in what promises to be someday a pond. I avoid looking at the beds behind the arbor and instead focus on the swelling buds on my white lilac and the yellow hints on the forsythia bush.

Definitely my garden has depth and it feels like a serious place. But it lacks dignity and purpose. Oh, there are parts that start the feeling of weight: the paver patio, the winding gravel path, the raised beds. But the jumble in the distance looses focus.

Gardens need some structure to create a feeling of weight. Just like your living room, too much furniture or too many magazines create a feeling of clutter or even less importance. Reduce those magazines to three, open the spaces, coordinate the pillows and you are on your way to the front page of Better Homes and Gardens.

Your garden needs the same treatment. We let some bushes get too big, allowing them to spread and lord over others, spreading through suckers and seedlings. Other plants we keep even though they are half dead; we feel guilty pulling them up because Aunt Martha gave them to us. Or maybe the next door neighbor, who said, “Don’t worry. No one can kill this plant.” Admit it, you killed the plant. Or maybe something else killed it. Maybe it misses Aunt Martha. Whatever, cut your losses, pull it out. Move it to the plant hospital part of your yard. Then you won’t feel so guilty.

Trim the bushes. Make some space. Add a plant with red blossoms such as Rhododendron Grace Seabrook or Taurus.  Add a bench, a winding path, an artistic urn at edge of a clearing. Limb up a tree, create a view. Visualize. Create. Gardens with Gravitas awaits each and every one of you!

We are a licensed, bonded, and insured company operated under the licensure of the State of Oregon Landscape Contractor’s Board. Our license information can be found here.